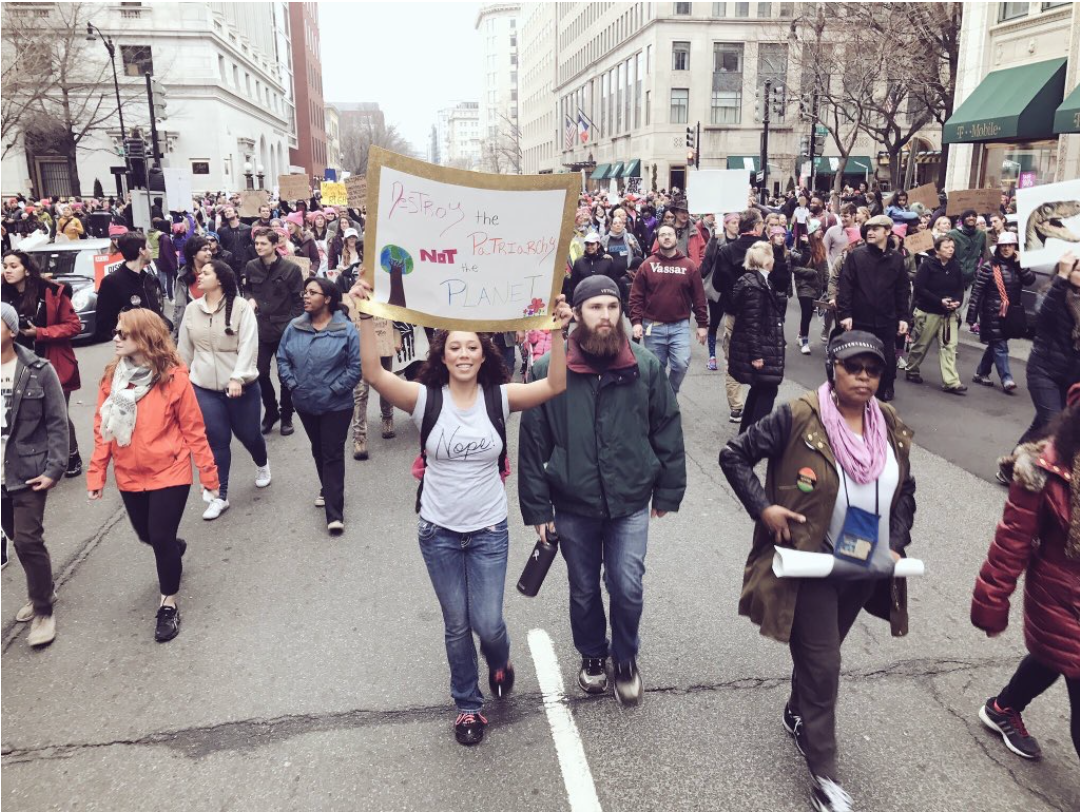 (Note: some entries have been edited for brevity or clarity)

A crew of fellow reporters and I were headed to Rochester, NY. There, we planned to pick up an artist who started a group called Politits: Art Coalition. Earlier that day, I left a note on my kitchen table for loved ones in case anything were to happen.

We experienced a mixture of nerves and excitement. The car was quiet, except for when someone saw a CNN update about the protests or a meme about Bill Clinton staring at Melania Trump for too long at the inauguration. Or when someone let out an occasional sigh in disbelief. Barack Obama was no longer our Commander-in-Chief.

We drove past a large statue of an eagle along the highway. The sky was ominous and grey. I pointed out someone’s car sticker: “I stand for our National Anthem.” I checked the revised White House website. It promoted heavier “law and order” and included promises to eliminate the Climate Action Plan. Reality started to sink in.

Our minds were on the election, the inauguration, and the days ahead. Someone in the car said something to the effect of, “There are no more words. We keep saying, ‘it’s shocking and it’s overwhelming.’ But nothing does it justice.” As a journalism student, even I couldn’t find the words.

I sat in the car, wondering why I was going to the march. Why would I, a 23-year-old black man, feel a sudden urge to be a part of something as big as the Women’s March? Why would I want to be the only man in a group of six people to drive 7.5 hours each way for this event? I hoped to find the answer at the march itself.

My friend who lives in D.C. sent me updates. More rioting and more arrests. When he ordered food at a restaurant, he saw Trump supporters wearing “Make America Great Again” hats. Everyone avoided the supporters and gave them dirty looks. That was the America I feared. “It’s a two way street, and I fear people are trying to make it a one-way street,” my friend texted me.

We pulled over for gas in Steam Valley, PA, and escaped the thick fog we drove through for miles. We spotted “Fry Bros Turkey Ranch,” a restaurant next to the gas station. Inside, it looked like an authentic version of Cracker Barrel. A man in camouflage overalls with a large beard stared at me. He didn’t stop staring until he and his family left about 30 minutes later.

The tension in the air made me wonder about issues beyond this weekend, beyond this Trump presidency. I wondered, in this new America, will there be spaces where people can’t go as journalists? As women? As black men? As people in the LGBT community? As immigrants? As anyone who doesn’t fit into the new American mold?

We jumped back in the car and drove through the clouds. Notorious B.I.G. played on the stereo. 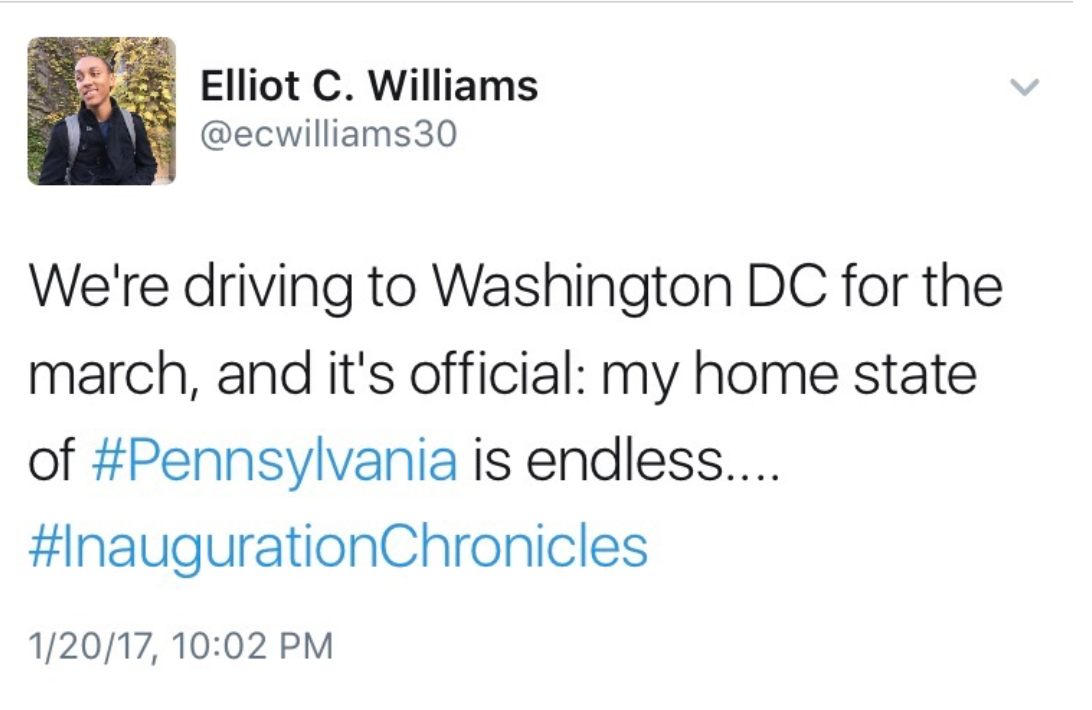 I drove the last leg of the trip, heading into Washington. I felt nervous because I didn’t know if people were still setting cars on fire. I finally saw a glimpse of hope as we arrived in the city. An Ohio license plate read, “We the people defend dignity.”

We stepped out of the car and heard the sirens. I prayed for people’s safety – for the protestors, the Trump supporters, and the officers speeding down E. Street in the middle of the night.

I prayed and went to bed thinking about a dream I had a few months ago in which I met Dr. Martin Luther King Jr. at the new National Museum of African American History and Culture. That dream felt so real. I hoped to make him proud.

I opened the book of Bible verses I carried with me. I turned to the section about fear. I read Isaiah 54:17: No weapon formed against you shall prosper…

“Men of quality support equality!” That was the first sign I noticed. We set our group meeting point in case anyone got lost: the corner of 3rd and Constitution Street.

I saw things I never thought I would. People screamed on megaphones about repentance and warned folks about the “END OF THE WORLD!” Meanwhile, two men passionately made out in front of them. Two older gentlemen held a huge copy of the constitution. Mothers stood with their daughters. People handed out Socialist Party flyers. Someone handed us homemade newsletters:

“Trump is carrying on Obama’s racist legacy!” it read.

“No thanks,” I said, and returned the newsletter.

We took a break from the overwhelming crowds to get lunch at “the DINER” and moved our car to a lot. On the TV screens, we saw marches around the country and globe and realized we were a part of something much bigger.

Eventually, people started to physically march. “A Change is Gonna Come,” by Sam Cooke played in the background. Young women marched arm in arm singing “This Land Is Your Land.” My friend pointed out a poster with Hillary Clinton in a headdress. I saw a man in a Confederate hat. People screamed, “Not my president!” I saw signs that read:

I grab my wife by her Ph.D.

The protesters didn’t seem angry – they were passionate, for sure – but when someone liked another protester’s sign or hat, she let her know. When someone needed help standing on a structure, another protester helped her up. There were now so many people (over half a million) that we couldn’t fully march the original planned route.

A man from Dallas named Cam held up a sign that read, “I make her sammiches,” with an arrow pointing to his wife. I approached him and he noticed my Philadelphia Eagles hat. I learned he was an avid Cowboys fan, but at that moment, we rooted for the same team. I told him that I, too, enjoyed making sammiches.

Then, there was a sudden commotion. The cops swarmed a man near a side entrance of the Treasury building. Everyone shouted, but I couldn’t hear what they were mad about. For the first time, I felt fear. I jogged away from the mess and lost track of my friends in the process. But soon, I heard them call my name and turned to find them smiling. We continued marching.

There were chefs from a nearby restaurant taking their lunch break cheering for us, as if to say, “I’m working today, but I’m with you!”

A motorcade of secret service Escalades maneuvered through the crowd, and a man stood in front to block it – perhaps, his Tiananmen Square moment. People chanted, “This is what democracy looks like!”

We passed an elderly woman with the sign, “Now you’ve pissed off grandma.” (BuzzFeed later ranked this the second best sign at the march).

A young man approached me as I rested and asked me what I was marching for. I said, “I’m marching for women’s rights and to observe for journalism.”

“Okay, just checking,” he replied. I couldn’t tell if he genuinely wanted to know what the march was about, or if he was just trying to be provocative. If it was the former, people really do live in echo chambers

I was in the National Museum of Women in the Arts, looking at a painting called “Superwoman,” when the answer came to me. I was there in support of my mother, my girlfriend, and her mother. I was there for my grandmothers and the women who came before them who put up with so much for me to be alive. I was there for the women in my journalism program at SU who do some of the most amazing work I’ve ever seen.

The reports came in: zero arrests in the Women’s March on Washington – over half a million people and no arrests. All peaceful, all powerful. I was sure there were some incidents that weren’t exactly peaceful – the one involving that guy who I saw by the Treasury building, for instance – but I was glad those rare incidents didn’t overshadow the overall message of the day.

We made it back to Syracuse safely. I entered my apartment and added to the dramatic letter I left on my kitchen table in case I died:

“I’ve never been a part of anything this big or this meaningful. I’ve never felt more alive.”

I had never witnessed my dad cry before. I could hear him tearing up on the phone. His voice shook as he told me how proud he was.

“Your mom’s dad and my grandfather were both great, great men – they would both be proud of the man you were out at that march yesterday, son. And I know my mother is smiling down on you from heaven.”